The Atlanta School Cheating Convictions – So Wrong On So Many Levels

Up front, I must emphasize that I am glad these administrators and their clique were caught, that they lost their jobs, and their careers were destroyed.  I applaud their conviction, and every fellow teacher I know finds the actions of these administrators reprehensible.  There is a nagging concern about not understanding a Georgia legal system that gave a longer sentence than murderers and repeat drug dealers routinely get here in Massachusetts.   But that is a topic for someone with far more expertise in legal matters than me.

Please be sure to FOLLOW our blog by clicking “follow” in the
upper right corner of this page.  Following a blog is ALWAYS ANONYMOUS.
You simply will receive a confidential email when new posts are made.

The harm caused by these administrators and their clique, cheating an entire class out of their education and sending children such a demotivating message about the value of school, is huge.  But the misdirected media coverage cheats generations to come because the coverage diverts us from the real issues that could lead to real education reform.  The real issues go far beyond this scandal.  A staggering 46% of new teachers now quit within the first five years.  SAT and ACT report just 26% of high school graduates are ready for college.  Charter school outperform traditional schools just 17% of the time, and are failing across the country.  The Boston school district, alone, has 4,500 students who are truant a least one day a week.  81% of teachers expect abuse by their administrators if they speak out.  60% of teachers believe administrative decisions in schools are based upon cronyism, not merit.  73% of teachers believe standardized testing drives all course content and teaching methods.  We now spend 25% of state budgets on education, pouring good money after bad failed policies, and education is getting worse!

All these issues are NOT caused solely by cheating, or by a bunch of reprehensible administrators and their clique!

The tragedy in the coverage is that, once again, we get diverted from the real issues as to why there are so many cheating scandals in education.  The Washington Post (April 2013) confirmed cheating scandals in thirty-seven states, and was convinced that there were far more actual incidents than were ever discovered.  They were right – the 37 are just the tip of the iceberg – the few that were caught.

Were these administrators and their clique reprehensible?  Yes!  But their personal characteristics were only a part of the issue.  What about the mandates and policies that prevent classroom teachers from being able to teach what is required to pass the test?  What about the schools being judged on a test score even though such results routinely are dragged down by just a handful of the children who are truant 30-plus days and allowed to “make up” or “excuse” the time by administrators—meaning they never receive the necessary teaching?  What about the unfairness of a music teacher being evaluated on standardized test scores for math?

We have a deeply flawed educational system. Inept mandates by career DoE bureaucrats with little or no classroom experience have cheated an entire generation of children out of the education they deserve.  We have administrators who routinely bully a teacher to change a failing grade to a passing one so that the principal’s graduation rates look good.  Yet every time we force such a passing grade we harm the child – he/she enters the next grade, with far tougher topics, and is missing the prerequisite foundations from the prior year.   The child then has no chance of passing a standardized test – because of the administrator’s forced promotion. 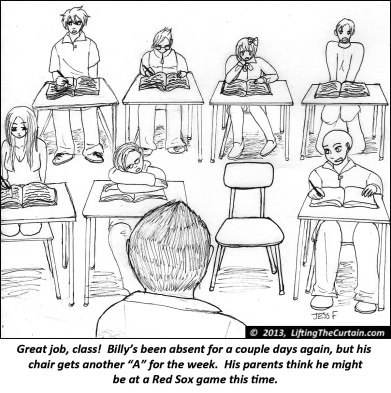 But it is easier to look at the scandal, and treat the symptom as though it is the cause.   The real issues remain hidden so the parents never see behind the curtain of the school entryway to the real issues.  And the legislators get to ignore the issues and simply trade more funding for campaign donations.

“What the trial did not explore was whether Dr. Hall herself was reacting to a culture of fear, intimidation, and retaliation that her board, state education officials, and the Bush and Obama administrations had created. Just as her principals’ jobs were in jeopardy if test scores didn’t rise, her tenure, too, was dependent on ever rising test scores.”

This fixation we have on symptoms, rather than causation, is deadly when trying to fix the real issues in education.  A parallel to Dickens’ Oliver Twist might be helpful.  Yes, there were bad children back in Dickens’ London.  Yes, there were those who stole food or were pickpockets.  Yes, stealing (the symptom!) is bad.  But before we throw all the street children into jail, we might want to look at the 1800’s systemic problems in Dickens’ London – starvation, famine, poorhouse slavery, and disease.  That starving children turn to theft of a cabbage should not be a shock.  One way to “solve” the stealing and pickpocket problem would have been to imprison all the street children.  But the better way might be to look at how to end the disease and famine, and a system that let people like Fagin and the Artful Dodger flourish.

The parallel today?  We want to focus on the cheating of these reprehensible administrators and their clique, even though what the good classroom teachers and local unions really need is someone to help end the disease and famine in the educational system.  Dickens had it right.

The second problem with the coverage is that every headline proclaims “teachers” were driving the cheating.  These were not teachers!  This was not a “Teacher” cheating scandal.  The Atlanta scandal was driven by non-teachers, administrators, many with little or no classroom teaching experience.  Yes, they were aided by members of the superintendent’s clique, but offsetting the handful of corrupt teachers that the administrators influenced to assist, there were thousands of great teachers in the Atlanta system who did not.  Yet we continue to blame it on “teachers.” 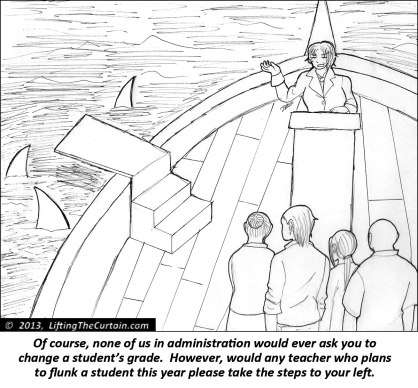 Blaming teachers has become a national pastime in the media.  Some creep teacher in a state a thousand miles away gets arrested, and 7,200,000 of us have to listen to our radios paint us all as pedophiles.  A state or national teacher’s union, caring more about being a PAC than education, takes a stand few teachers agree with, yet no one hears the forgotten local teacher’s union cry for help, still trying to fix the real issues.

The bottom line – once again children are the losers here

Holding these administrators and their clique accountable was a good step for education.  Media coverage that uses it to misdirect us away from the real causes of our national education failure, and coverage that uses the action of a handful of administrators and their clique as representative of 7,200,000 dedicated classroom teachers, will end up causing far more damage than the actual scandal itself.  The coverage will make it easy for career DoE bureaucrats to continue business as usual, and for legislators to kick the can down the road to cheat another generation of children out of an education.

We need to fix this!

KIRKUS and CLARION both praise the acclaimed book “…from the unique
perspective of a classroom teacher”   about our failing education system:
Lifting the Curtain:  The disgrace we call urban high school education.
The 2nd edition includes dozens of teacher submissions from across the USA
and nine new chapters.  Please get a copy HERE or on Amazon.